Rain and Wabi, Savi ( The beauty to be found in spareness and simplicity and elegant ) 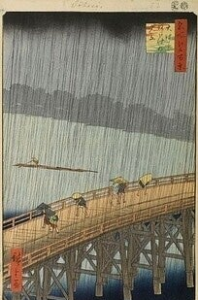 “In the West, rain is drawn in dots, but why do Japanese Ukiyo-e draw rain in lines?” Yusai Okuda, a dyeing artist, was asked a question in the United States. At that time, he said that he gave a makeshift answer, saying, “Western bells ring clapperboards and clapperboards. Japanese bells ring gone

It seems to be 20 years ago, after returning to Japan and studying, he noticed that it is Japanese Wabi-Sabi that draws rain with lines. The Japanese portray the beauty of the passage of time, not the beauty of the moment. The discoloration of the blue tatami mats and the changing colors of the Buddha statues and buildings were also captured as Wabi and Sabi.  There is a difference in the way of expressing rain including momentary rain and the passage of time between the Western countries and the Orient rain.

The most beautiful moment when it is completed is a Western way of thinking. In Japan, beauty is completed, including the passage of time.

Certainly, the rain of Ukiyo-e in the Edo period is drawn with lines. Hiroshige Utagawa was the first painter in the world to draw rain with lines. Van Gogh imitated it and became known to the world at once. I thought about Wabi and Sabi during this rainy season.
The end of document