（３）Kyoto Cuisine and Okudosan: The History of the Kitchen
Yoshie Doi 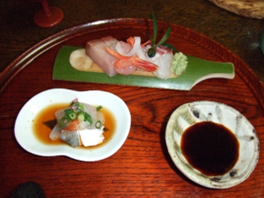 “I want to share the hearth with you.” These are the words of a man from Swahili, Africa, when he proposes. It is a word that means the center of the family, the center of the house. As far as history can be confirmed, even in Japan, the center of the house has been Okudosan since the Jomon period. We also had family gatherings and interacted with Okudo-san. Okudosan at that time was an underground furnace that was dug in the ground and burned fire. A little later, a 7,200-year-old climbing kiln has been discovered on the continent, and it is speculated that it became a stone hearth after being able to make earthenware. This Okudosan also served as a source of heat and light for cooking. You can see how important the equipment using fire was.

What people now call the kitchen is originally, during the Heian period, the place where food was served on a table with legs called a Daiban in the Imperial court was called a Daiban place, and at some point it came to be called a kitchen for short.

Charcoal is used when cooking in this Heian period. Charcoal does not emit smoke, so it does not stain clothes or houses. Originally, human beings started using fire and created a culture different from animals. And it was the Jomon pottery that confirmed the utensils and pots used for cooking in Japan.

Dr. Richard Langham of Harvard University says that humans evolved by cooking In “The Gift of Fire: Humans Evolved through Cooking,” he writes that during the 6-million-year evolution of mankind, the teeth became smaller in size between 1.9 million and 1.8 million years, and a large brain and small stomach and intestines developed. increase. It can be inferred that cooking contributes greatly to this.

Until the Taisho period, the kitchen originally referred to the place where cooking was done, when there were no modern water supply facilities. In the Edo period and the Meiji period, the kitchen was the center of the house, and although the sink was on the dirt floor, it was very inconvenient. With the movement of Taisho democracy, the three-piece set of electricity, gas and water spread. In rural areas, however, it only took hold after the end of World War II.

During its 1,074 years as the capital of Kyoto, delicious foods from all over the country gathered, and by mastering the art of making those ingredients even more delicious, Kyoto has become a special product that tickles the five senses and is comparable to a work of art. About six years ago, my friend’s older sister, a Hollywood film director, suddenly decided to visit Japan, and she was impressed by the restaurant in Gion that I introduced to her. There were no rooms available, so we had to sit on cushions in the tea room. It’s worth it.” I was impressed.