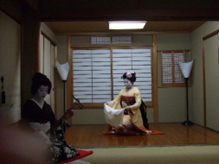 I am often asked, “Where is Gion from and how far?” “People who live in Kyoto also ask questions.” Gion extends north and south from the border of Kenninji Temple to Shimbashi-dori Street, and east-west from Higashioji-dori Street to Yamatooji-dori Street.

Gion was originally a town in front of Yasaka Shrine from the Kamakura period, but it became a burnt-out ruin during the Onin War. However, as the Gion-e (Gion Festival) was revived after the Onin War, the number of pilgrims increased, and water teahouses and water drawing women appeared for the pilgrims, which is the beginning of Gion. Originally, it was a teahouse that served tea and dumplings, but it changed to the current teahouse that offers sake and songs and dances.

Around 1670 (Kanbun 10), along Yamato-oji Street, the townscape moved southward from the direction of Sanjo, and between Shijo-dori south and Donguri-no-zushi, there was Gion Sotoroku-cho. 〉 was formed.

In 1713 (Shoutoku 3), a town was built along the Shirakawa River, and six towns in Gion appeared. All the theaters in Shijo-gawara moved to Nakanocho, one of the six soto-cho districts.

In 1868 (Keio 3), permission for permanent business was finally granted, and it continued to develop. Gion flourished at its peak during the Meiji Restoration, when there were 178 Maiko and 560 Geiko. In the Showa era, around 1961, there were still 51 maiko and 372 geisha.In the Reiwa era, the number of geisha and maiko will decline.

Occupation Party producer that exists only in Kyoto

A party producer, who only exists as a profession in Kyoto, is a group of hospitality unique to Kyoto. It is a behind-the-scenes occupation that supports banquets, tea ceremonies, ceremonial occasions, etc., and it is also the job of the caterer to fetch the famous water used in the tea ceremony the day before. The role of the party producer is to make the maiko and geisha stand out by grasping the tea name and sweets, and is also the general producer of the banquet, and is like a site director.

Recently, there are also young party producers, and their behavior is so

sophisticated that it is eye-opening, and the banquet proceeds peacefully. I also

learned from the behavior of this party producer

There are many things. Hospitality to enjoy sitting and conversation

Power is the basis. This is also the competence of the proprietress of Gion.

When they greet someone, it is Kyoto to kneel and bow your head and shorten your body as much as possible. It is the shape of The old man Konosuke Matsushita used to bow his knees as a way of bowing for merchants.

It is important to express your heart in a form, just as it was practiced to bend your hands and put your hands on your knees.

Unlike local cuisine, Kyoto cuisine is served with looking like small display.