The Spanish flu (1918-1920 epidemic) affected about 500 million people, a third of the world’s population. The death toll is estimated to be 40 to 50 million, and the fatality rate is as high as 10%, but the fatality rate for Japanese is 1.6%. It means that 23 million people will be infected and 380,000 will die, which is a low figure in terms of the world’s fatality rate.
Then, looking at why the severity and lethality were low, it was that when the cytokine was released excessively by the immune reaction released when the cells were attacked, on the contrary, the vigorous one attacked the immune system and became severe. I want to know what to do. Foods that suppress the excessive release of this cytokine. Fucoidan has been found to suppress the symptoms of pneumonia by changing the pattern of cytokine development.
In other words, it seems that the fucoidan contained in wakame, mozuku, mekabu, rock nori, tengusa (kante and tokoroten) ingredients have a calming effect. The writer myself eats green tea and seaweed every day and eat fermented foods , I also sleep well and cope with this infectious disease. By the way, in 2006, the US Department of Health and Human Services applied for a patent for future red algae (the most common type of seaweed). They have obtained the patent for the foods that Japanese people such as Iwanori routinely eat. (US patent # US8088729B2) shows that the components extracted from these seaweeds have anti-RNA virus action. We will be less likely to get the flu and coronavirus. 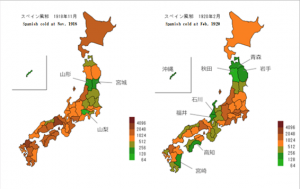 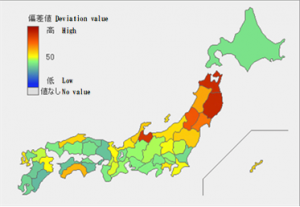 As can be seen from this fact, the prevalence of Spanish cold is low in Iwate prefecture, which consumes a lot of seaweed, and the new coronavirus this time is zero in Iwate prefecture as of May 16th. I thought that Hokkaido consumes a lot of seaweed, but in Hokkaido it is almost consumed and used only for soup stock.
When I welcome guests from abroad, I often have surprising conversations. Previously, when I served burdock simmered food, I was asked “Is this a twig?” And I answered that it was a vegetable. Seaweeds also remember being asked what is this. As a Japanese, Japanese meals are commonplace, but they are also rare in overseas. And in fact, it is also a very valuable food culture to prevent infections. Everyone, please eat Japanese food and boost your immunity.
The end of document

From a city that has been locked down

Miyako dance will be canceled this year！